Some functions are hard to Google. It’s often easier to speak about concrete examples: I have a list '(x y z), and an index 1, and I want a list without the element at that position: '(x z). 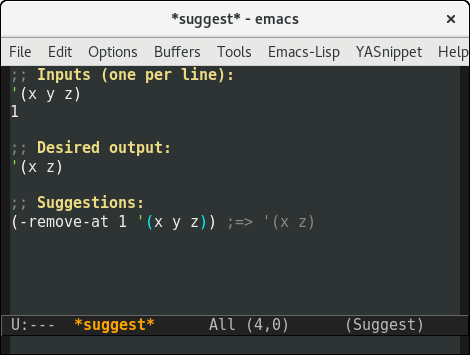 I was blown away when I saw this feature implemented in Smalltalk. I decided to build an Emacs implementation and it’s super helpful when you need it. The screenshot above shows it in action.

This project is much easier in a language with little syntax. Suppose we’re looking for arithmetic functions: 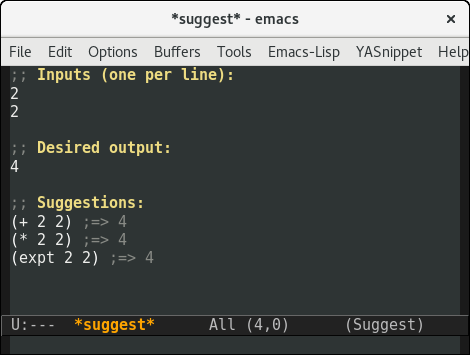 suggest.el simply has a list of functions, and tries each one in turn. The fact that + is syntactically the same as any other function is a big help here. We don’t need to do any special formatting for infix functions.

suggest.el brute-force searches its list of functions. It ignores anything that throws an error, or returns a value different to the output requested.

We currently have a list of 140 functions. I was expecting this to be slow, but it’s instant.

We also need to try every permutation of arguments, which is computationally expensive. We want users to discover functions like nth, even if they get arguments in the wrong order. There are a lot of permutations, but typically users only use 1-3 arguments, so it’s not a problem.

If suggest.el find a match, then it doesn’t try any other orderings. This prevents us suggesting both (+ 2 3) and (+ 3 2) – the user would probably prefer the order they’ve proposed anyway.

Eval All The Way

suggest.el evals all the expressions given, allowing users to enter literals, variables, or even function expressions. This is convenient when developing new packages and you want to use values from your package. 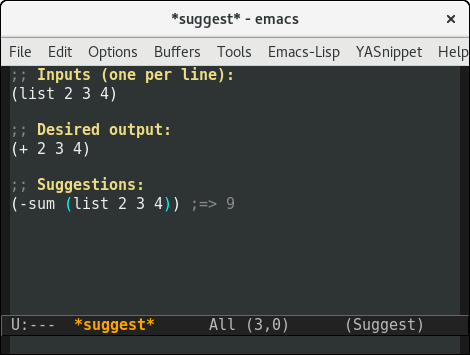 In the above screenshot, note how the suggested expression (-sum (list 2 3 4)) uses exactly the expression given, so it can be copy-pasted. However, we show the final value => 9, so it’s clear what the function is doing.

To take best advantage of Emacs, the UI needs to work like a text editor. suggest-mode derives from emacs-lisp-mode, so your favourite lisp packages just work. The entire buffer is a valid lisp file and we get highlighting for free.

suggest.el adds a few extra touches on top. We use overlays to highlight the headings, which overrides the comment highlighting. Headings and output also use the special property read-only to guide users into typing in the correct places.

suggest.el also uses change hooks (pictured above) to inform the user that they need to re-run suggest-update. This shows C-c C-c (the default keybinding) by default. Just like the Emacs tutorial, suggest.el will always use the current keybindings.

suggest.el has a whitelist of functions that are safe to run. Which functions should we include? suggest.el is in a position of responsibility, as it affects the code that users write.

Functions absolutely cannot have side-effects. Calling delete-file could be catastrophic. If a function only mutated its input arguments, that would be safe, but it’s not necessarily what the user expected. 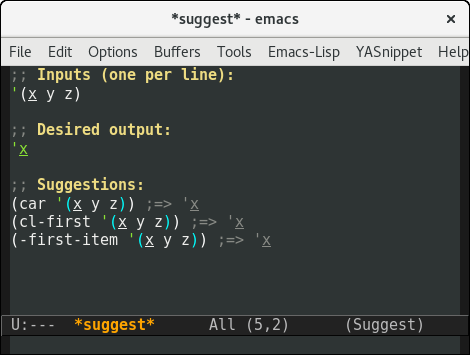 suggest.el has to decide which function aliases to show. I’ve been convincingly persuaded that predicate functions should use -p, so suggest.el prefers those aliases. suggest.el also favours cl-lib over the popular, but deprecated cl (e.g. cl-first not first).

We also have to decide which packages to include. suggest.el includes third-party packages that I consider important (dash.el, s.el and f.el). Long term, I hope packages will add to suggest-functions using eval-after-load.

Third-party packages often have a higher proportion of pure functions. In the case of f.el, I’ve included a few impure functions that read the filesystem, as they’re safe.

It’s also tricky to pick which functions belong in the whitelist. suggest.el tries to offer functions that you’re likely to ‘stumble across’.

I found that the best functions take 1-3 arguments of simple types. You’re unlikely to find a higher-order function from a random example. We also want functions that are characterised by a single example. Single-argument predicates aren’t much use, since they need several examples to demonstrate their behaviour.

We currently have functions for lists, alists, plists, hash tables, numbers, strings, symbols and paths. This covers much of my day-to-day development, and I’ve already learnt some new functions!

Give It A Try!

suggest.el is on GitHub, on MELPA, and I would love to hear your feedback. You can tweet at me or file an issue.