I’m a big admirer of the Julia programming language: it’s a fast general-purpose language with a nice syntax, macros, and a decent package manager.

No respectable up-and-coming language should be without good editor support. I’ve been polishing the Emacs mode, and learnt a lot about the language. If you’re writing Julia code, or integrating an editor, this should be interesting to you.

I’ve written a complete Julia syntax highlighting test file which exercises all the different syntactic features of the language. You can use this to test Julia support in your editor of choice.

Julia supports two ways of declaring functions, which the docs describe as ‘basic’ and ‘terse’.

We want to highlight keywords (such as function and end) and to highlight function names (f in this example). This is pretty straightforward: we can write a regular expression that spots either the keyword function or a symbol followed by something roughly like (.*?) =.

We can also define functions in an explicit namespace. This is also straightforward, we just highlight the last symbol after the dot.

A function definition may also include type variables. This isn’t too difficult to handle either, we just need to adjust our terse regular expression to step over the curly brackets.

However, highlighting gets harder with nested brackets.

At this point, our naive regular expression falls down. We need to count brackets, or write a crude parser. The Emacs editing mode doesn’t yet handle this case.

Highlighting macros is easy. There are some awkward syntactic edge cases but these don’t affect highlighting.

Julia has a lot of built-in functions. After some discussion, we felt that it wasn’t worth special-casing functions that are keywords in other languages, such as throw and error.

Julia has a lovely syntax here, but it takes a little care to highlight correctly.

For characters, Julia uses single quotes, but it also supports ' as an operator. This gives very readable mathematical formulae.

We are handling most of this syntax in the Emacs mode, but it’s not perfect yet. I think we should highlight interpolated values in strings. See my test file for a full set of examples.

Julia’s comment syntax is also very nice. There are single-line and multi-line comments, and they support arbitrary nesting.

Emacs makes it easy for us to support all this different variants, so we’ve supported this for a long time.

You can declare your own types in Julia. 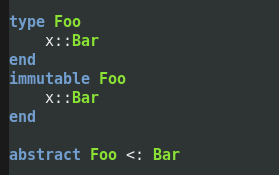 This is mostly a case of knowing all the keywords for type declaration, so it’s straightforward.

The operator <: is particularly tricky. It is used in type declarations to declare subtypes, but it’s also used a boolean operator to see if one value is a subtype of another x <: y. I believe this is impossible to highlight correctly in all cases.

We can cheat by having a full list of built-in types in our highlighting code, so we highlight most subtype declarations correctly.

Julia supports optional type annotations in functions and on variables. These are simple to highlight, but we need to get :: right before dealing with quoted symbols.

Julia has a local keyword which lets you introduce local variable bindings. I’d love to highlight this correctly too.

This requires parsing to handle correctly, so we don’t handle it yet. We can’t simply look for commas, as there may be arbitrary Julia expressions used.

The hardest part of Julia’s syntax is :. There have also been users confused by this syntax.

I’ve opened a pull request that enables Emacs to handle the most common usages correctly, but this is very hard to get right in all cases.

Finally, Julia has a really neat numeric syntax. It supports all the literals you could possibly want. It also lets you write 2x as a shorthand for 2 * x, which makes many equations in Julia much more similar to a maths textbook.

The Emacs mode currently doesn’t highlight these, but we probably should. Some Emacs modes highlight numbers, some don’t, but for a language with a focus on scientific computing, it would make sense to highlight numbers. It’s particularly helpful to help readers see that 2x is two separate symbols.

Julia’s syntax isn’t completely set in stone, but I doubt much of the syntax will change in ways that affect highlighting. The syntax favours readability over simple parsing (a great tradeoff), so writing a highlighter takes some careful thought.

Once you’ve got syntax highlighting working, it’s much easier to handle indentation. I think Emacs’ ability to indent Julia is pretty good (this blog post is plenty long enough without getting into indentation) and this is because it can fairly robustly identify block delimiters for highlighting.

Finally, it’s also desirable to have as-you-type syntax checking and linting. Flycheck will add support for this using Lint.jl as soon as Lint.jl/Julia performance is good enough to run on demand without a persistent process.

If you do encounter a bug with Emacs and Julia, there’s a ‘julia-mode’ issue label to track any bugs.